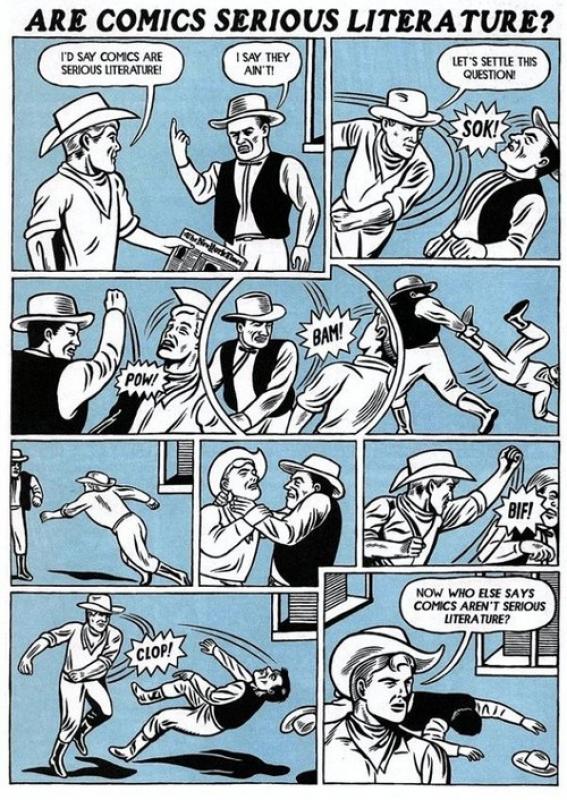 'Graphic novel' as a term  first reached my conscious in the seventies by way of an advertisement from the comic shop Forbidden Planet.

I took it as a sales ploy designed by Marketing-man to increase the customer base by implying some comic-book intellectual respectability. Which after a fashion seemed reasonable.Though there was an unformulated feeling that it did comics a disservice my disquiet went un-analysed apart from a recognition that my view was prejudiced by an admiration for Segar's Popeye. I gave it little more thought.

Recently  the comment from Tobias "Tsk, 'graphic novels', let's not argue about semantics, they're comics . . ."(1 )  bundled the subject back into my awareness.

Some superficial internet research revealed that while my back was turned the term' graphic novel' has been a touchy subject for some for some while. There are both mainstream and alternative creators unhappy with the term. (2)

One of the subjects of that blog compounded the problem - the entry for literary prizes of 'grahic novels' Dotter and Her Fathers Eyes by Mary and Bryan Talbot and Days of the Bagnold Summer by Jeff Winterhart. (3) Nice to see virtue rewarded  but doubts raised about the appropriateness of these contestants in these contest. Any satisfaction at seeing comics taken seriously is muted by my comic-centred suspicion that an act of appropriation has taken place, that are comics can only be made acceptable by giving them a literary gloss. It would be harsh to suggest the thinking is "these are good so they can't be comics" but for some reviewers a gulf seems to exist between what comics largely are and the narrow and particular manifestation of comics to which they are prepared to give consideration. (4) There are different takes on what constitutes a 'graphic novel' with sometimes judgement being based on literary content rather than comic strip values.

Without expecting to resolve what is a essentially a dispute over the meaning of words here is a clunky effort at reasoning following a little poking into my 'tsk graphic novels' response.

My contention is that there has been a category mistake.

Category mistake - To show that a category mistake has been committed one must typically show that once the phenomenon in question is properly understood, it becomes clear that the claim being made about it could not possibly be true.

( All definitions derived from Chambers Dictionary 1998 and Wikipedia)

Literature - the art of composition in prose or verse: the whole body of literary composition universally, or in any given language.

In addition to their subject matter  it is in the nature and use of language by which prose and poetry are judged.

Novel - a fictitious prose narrative or tale presenting a picture of real life, esp. of the emotional crises in the life history of the men and women portrayed. (5) (6)

Comic strip - a comic strip is a sequence of drawings arranged in interrelated panels to display brief humour or form a narrative, often serialised with (possible) text in balloons and caption.

The comic strip originated as additional material in word oriented magazines and newspapers and existed prior to the publication of comic books.

Graphic novel - a narrative work in which the story is conveyed to the reader using sequential art, either in an experimental design or traditional comics format. The term is employed I a broad manner, encompassing non-fiction works and thematically linked short stories as well as fictional stories across a number of genres.

A comic strips weekly episodes collected between covers can then be described as a graphic novel. The same fat comic books and collections once called 'albums'. (7)

As demonstrated by Scott McCloud, Will Eisner and others, comics have unique features and aesthetic discipline and it is by these than ay comic book form needs to be judged.

The French were onto something when they applied the term 'the Ninth Art' to comics.(8) Having comics in a classification of its own seems entirely right since it is only by sleight-of-hand be regarded as a subset of any of the other arts. Comics are not a story with illustrations but a story told in and by images with, if required, added words. Here's a thought - comics are like circus. In this respect - each is a combination of disciplines from other art forms fused and added to in a manner that makes it unique to itself. However dramatic and theatrical the circus could not be mistaken for a theatre drama.

The term graphic novel is with us now and we have to learn to live with it. It has its uses but we know that it is just one way of presenting some comics. The comic is a form of expression and story telling in its own right, with its merits measured by its own values. As Popeye put it "I yam what I yam."

Much more might be said but this is already longer than is good for me.

3 Why the award nominators chose to do this and what regular  novelists make of this is intriguing but someone else's problem. One view at

The Talbots won the biography prize. The judges reported as saying it " had all the qualities displayed by more conventional works but these were enhanced by its visual flair".

4 Indicative of this is that in The Observers 'Best graphic novels of 2012' all books were from independent publishers. It took the intervention of Vernacularman to point out the existence of mainstream comics. Right on Vern.

5. Probably defining what is known as the literary novel. Readers may well believe that describing novels as depictions of real life raises questions about thrillers, science fiction and fantasy novels. But there you go.

6. One can only be supportive of any comic creator wishing to produce a meaningful work with serious thought about the human condition. Such an approach would essentially be that of an artist in an art project. But then that personal creative approach is apparent in Krazy Kat or Little Nemo, neither of which seem likely to be described as a novel, graphic or otherwise. Both are the individual visions of their creators, both are quintessentially comics. It seems surprising and speaks well for the artists and writers concerned that the industrialised, assembly line comics practiced by much of the worlds  comic book industry has led so much good stuff. True that is alongside some pretty awful.

7. Charles Dickens published in episodes so serialisation is no measure of quality or indeed much else. However I cannot imagine anyone describing a collection of Segar's Popeye as a graphic novel despite it having the same formal characteristics as ( graphic novel of choice here)  and despite it being a good read, with good storytelling, character development and invention.

8 Here is one categorisation of the Nine Arts

1. painting ( including drawing and photography)

9 comics ( now universally called the ninth art, the only really fixed 'number term' nowadays. and the most recent.

April 5th. Despite apparent lack of interest I this topic when I found that final image I though it too good to leave out.